IN A LAND THAT HOLLYWOOD TREATS LIKE ITS OWN TROPICAL BACKLOT, ONE ASPIRING ACTOR HAS A PLAN TO MAKE IT BIG. You may not recognize Teddy Wells, but there’s
a good chance you’ve laid eyes on him before. He’s appeared in dozens of movies and TV shows shot in Hawaii. The reason his face isn’t more familiar is because it’s often a blur, or a quick blip, or a dot in the distance. Sometimes, just the back of his head makes it onto the screen. Sometimes, he’s cut out of a scene altogether. Such is the inglorious life of the hard-working background actor.

Teddy has been doing background—the nice way of saying, being an extra—in Hawaii for 15 years. He’s played a bellhop on Fantasy Island, an African villager in ER, an Islander in Last Resort and a poacher in Tears of the Sun. He was a cop driving an ATV on the beach in Baywatch Hawaii. He was the passenger in the pickup truck that swerved to avoid hitting a cow in Mighty Joe Young. He was the guy in the hotel lobby that Damon Wayans accidentally bumped into in My Wife and Kids. He was the porter on the dock who unloaded Matthew Broderick’s bags in Godzilla. In Hawaii Five-0, he milled around in the background at the airport. In Lost, he played, among other parts, a dead airline passenger.

Often, he’s utterly anonymous. Other times he’s clearly, if briefly, identifiable. You can see him in Battleship as a Navy officer standing at attention behind Liam Neesom on the deck of the U.S.S. Missouri. That’s clearly him as a native guide leading Lily Tomlin through the jungle in Krippendorf’s Tribe. That’s definitely Teddy, with a rifle, chasing some of Lost’s main characters down the beach and into the woods.

Throughout his whole career in the background, he’s been quietly observing how films are made and soaking up as much as he can about how the motion picture industry works. One thing he’s learned is that extras don’t always get a whole lot of respect. He’s worked on sets where they have been made to wait for hours in the sun without shade or water, talked to like children and moved around like cattle. But he’s also been on sets where the extras were treated royally, allowed to relax in air-conditioned tents, and served meals on actual china with real silverware, rather than the paper plates and plastic utensils they usually get.

For all of his efforts, Teddy generally makes $135 a day, the rate that members of the Screen Actors Guild, such as himself, get for background. Non-union extras are lucky if they make $100 a day.

“In Hawaii, you won’t make $5,000 a year being an extra,” says Teddy, who has made his living as a chef, a smoothie shop franchisee and an online coffee distributor.

The answer is, yes. It’s all of those things. Teddy would like to be a star, to make it big Hollywood. The only thing is, he doesn’t want to leave Honolulu to do it. And he doesn’t believe he has to.

The conventional wisdom is that actors who aspire to break into the film industry must move to Los Angeles, to stick their heads into the jaws of the beast. That’s where all the work is. But Teddy likes Hawaii. And, as a black actor with a SAG card, in a state without a lot of black people at all, let alone black union actors, he’s found a niche here. Why leave?

So he’s staying put, staying passionate, staying positive and keeping the TV in his kitchen tuned to the Oprah Winfrey Network for inspiration. He turns up at every cattle call that comes to town, and if another actor gets picked over him, he doesn’t let it get him down. “You should be joyous and glad that they got that role, because it was their time, not your time,” he says. “It’s like Oprah says, ‘When you’re in your line of duty, everything becomes effortless.’ So if you’re in your line of duty, and you’re supposed to get that role, it will happen. It’s just a matter of when it’s your time.”

Teddy takes his craft seriously. He watches the performances of other background actors with a critic’s eye. He can’t believe the rookie mistakes some of them make, like the woman in the background of a TV show he saw recently who sat wide-eyed, gape-mouthed and frozen like a statue. “She looked like a deer caught in the headlights,” he says. He studies and critiques his own performances, too. “If I see myself, like, sitting at a table, and I don’t like how it looks because I don’t look busy enough, I know the director probably didn’t like it either,” he says. “Whether I’m blurred out or not, my actions matter.”

When Teddy’s on a set, he doesn’t allow himself to spend more than five minutes socializing with the other extras. Partly he does this because of an experience he had on the set of Godzilla, early in his career.

A scene shot at the end of Heeia Pier, in which Teddy unloaded Matthew Broderick’s luggage from a seaplane, put Teddy and Broderick alone together with plenty of time to talk between takes. As Teddy recalls the conversation, Broderick told him: “Right now, everybody is watching you and me talking, and they all want to be you, standing here talking to me. Everybody wants to be in the position that you’re in, and if they see the weakness in you, they will do whatever it takes to highlight it. Always remember, nobody here is your friend.”

The other reason Teddy minimizes the socializing is the same reason he doesn’t bring reading material, crossword puzzles or anything like that to the set, as extras typically do to kill time. He spends his down time watching and learning. “Most of the time, if you’re an extra, they don’t mind you hanging around the set if you’re paying attention,” he says.

If an extra is going to be plucked from the obscurity of the background and given an upgrade, it’s not going to be the extra reading the newspaper, playing Angry Birds or chitchatting with the other extras. It’s going to be the extra who’s been paying attention and is ready to go. Upgrades do happen. The odds aren’t great, but they happen. So far, Teddy’s gotten two big ones, with commensurate bumps in pay.

“I treat it like the lottery,” he says. “You can’t win if you don’t play. There’s more opportunity if I can get on the set than if I’m staying home. You’re guaranteed to make the $135 bucks, right? But you have the potential to walk away with thousands. Just by being there.”

His first upgrade came on his very first film, Krippendorf’s Tribe, in 1998. He had been cast in a non-speaking role, as one of the native guides leading an expedition through the jungle. One of the other guides, an actor from Los Angeles, was supposed to say a few words in a fictitious native tongue (which roughly translated to, “It’s too far uphill. Let’s go back!”). But as they were shooting the scene, Teddy recalls, the director decided the line did not sound right coming from that character. “So they pulled me aside, handed me the script, had me read the role, then said, ‘OK, you do it,’” he says. “Because it was a speaking part, I went from making, like, $100 a day to making $865 a day. On my first job!”

His next big upgrade came on Lost, where he went from playing an airline crash victim, to occasionally playing one of the Others, to getting a regular part as one of the Others. His Other character even had a name, Ivan. Ivan appeared in eight episodes.

In one, after finding a comrade locked in a cage, Ivan says, “What happened?”

“Open the cage,” his comrade snaps.

In another episode, Ivan says to the show’s main character, Jack: “His blood pressure’s dropping. Should he be bleeding like that?”

Jack says: “No. No, he shouldn’t,” then punches Ivan in the face.

When Ivan’s character was eliminated, Teddy found out about it the hard way—while watching Lost and seeing a tent that Ivan was supposed to be in blown to smithereens with dynamite. “I saw that and said, ‘Oh, no! They killed Ivan!’” he says.

For a couple of years after the unceremonious end of his run on Lost, the background jobs coming his way slowed to a crawl. Part of the problem, Teddy realized, was that the film industry in Hawaii simply isn’t as robust as it could be. Part of the solution, he decided, would be to bring some organization to the pool of local talent.

With that in mind, he started an online social networking site, the Hawaii Actors Network. It’s a place where Hawaii’s actors and would-be actors can post headshots, talk shop, and keep abreast of the latest industry news, gossip and rumors. Casting directors sometimes post exclusive crew calls on HAN. When the independently produced movie You May Not Kiss the Bride premiered in Hawaii, HAN members filled the theater. Teddy once rallied HAN members to protest at the state Capitol in support of a stronger film industry.

The network has grown rapidly in its four years of existence, and now includes more than 6,700 members, Teddy says.

Along the way, Teddy has a achieved a level of Internet fame that has surpassed any notoriety he’s achieved as a background actor. HAN members recognize him everywhere he goes, he says. But, he’s quick to add, HAN isn’t about him.

Meanwhile, he’s continuing to take every background-acting gig that comes his way. And while the other extras are chitchatting in the extras’ holding area, he’s standing on the sidelines, near the director and principal performers, watching, learning and ready for anything.

“I believe that I will be on the set one day, and somebody will see me, and come to me and say, ‘You know what? You’re perfect for what I need.’” 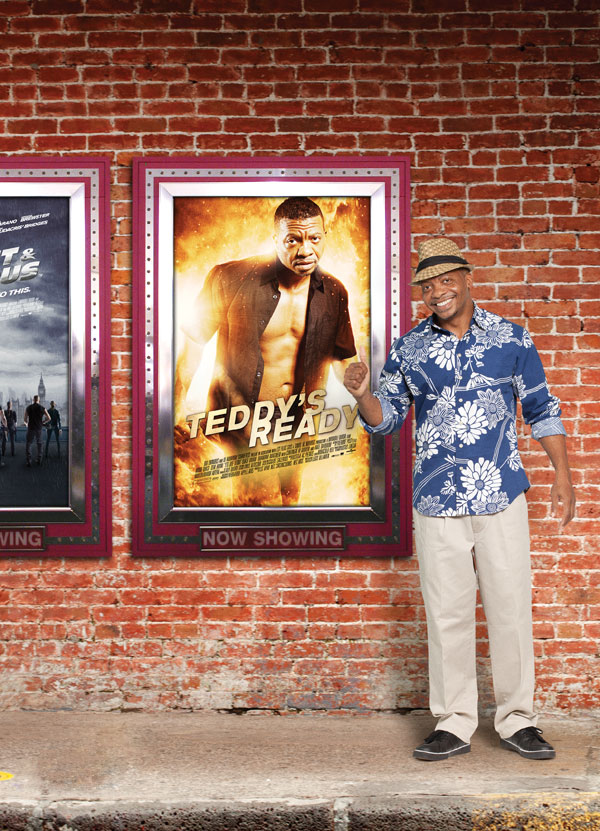